The GEBCO world map shows the bathymetry of the world's ocean floor in the form of a shaded relief colour map.

Please note that because of the size of the files we recommend that they are saved to disk rather than opened from the above links. 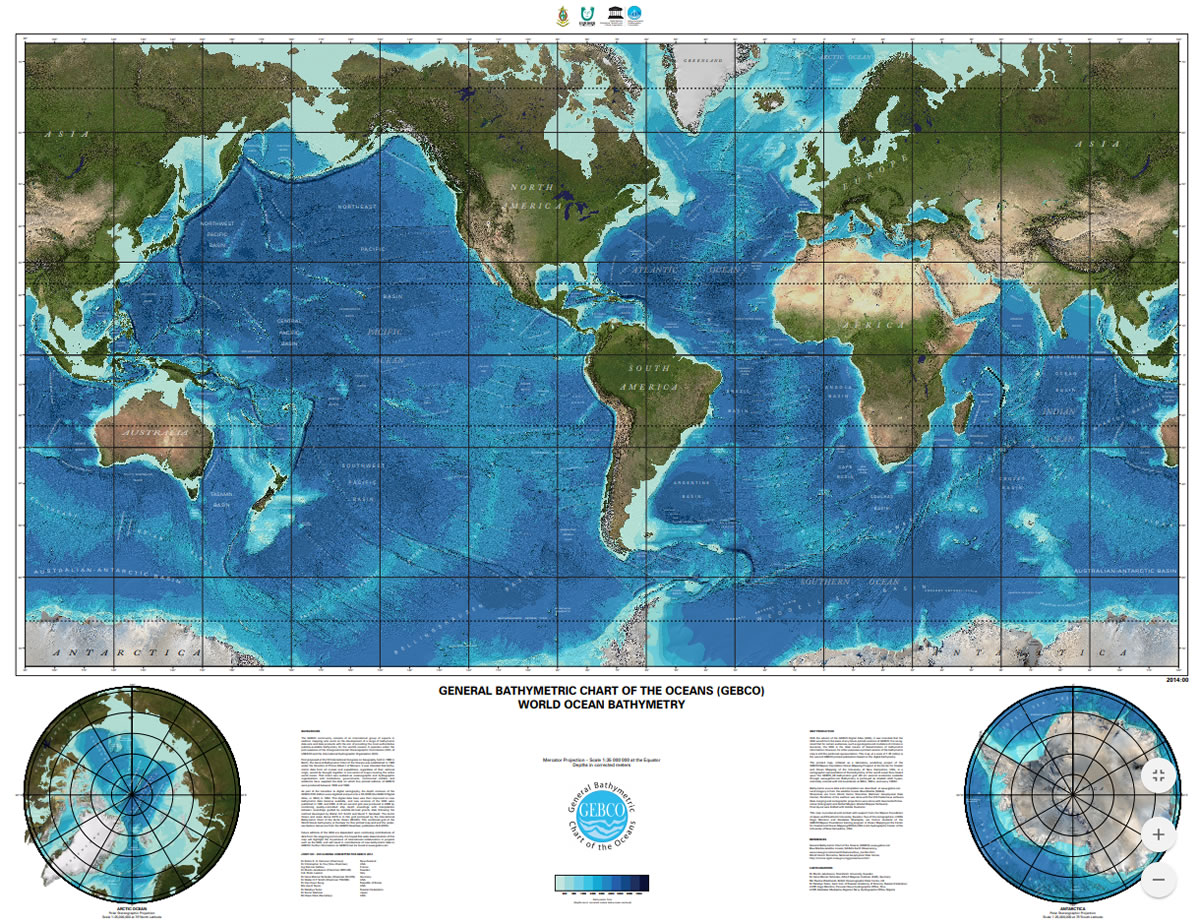 Creation of the map

Work on the creation of the GEBCO world map began as a laboratory workshop project of the Nippon Foundation/GEBCO Training Project at the Center for Coastal and Ocean Mapping of the University of New Hampshire, USA.

The map is based upon bathymetry data from the GEBCO_08 Grid, version 20100927, a global bathymetric grid with 30 arc-second spacing. The grid is largely based upon a database of ship-track soundings with interpolation between soundings guided by satellite-derived gravity data. Where they improve on the existing grid, data sets developed by other methods have been included.

This release is an updated version of the 2013 world map (second release). It now includes the names of undersea features.

The first release of the GEBCO world map was published in 2007 and was based on bathymetry data from the GEBCO One Minute Grid.

Use of the GEBCO world map

The image file has been made available for you to download and either print or use in digital form.

The map is supplied under the following terms and conditions

The aim of the IBCAO initiative is to develop a digital database containing all available bathymetric data north of 64° North, for use by mapmakers, researchers, institutions and others whose work requires a detailed and accurate knowledge of the depth and the shape of the Arctic seabed.

Please note as the file is large we recommend you right-click and save it rather than opening the link. 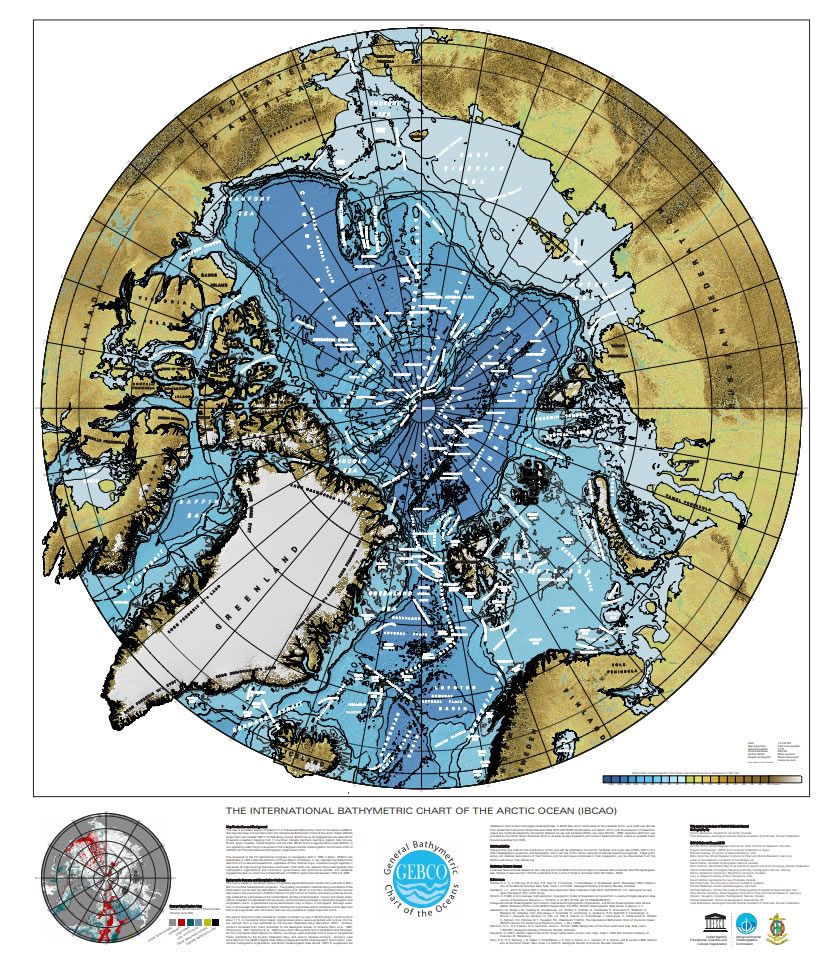 The map is based on the IBCAO Version 3.0 gridded digital bathymetric model. It has a scale of 1:6 000 000 and is based on a polar stereographic projection with standard parallel at 75°N.

The gridding compilation methods along with details of the bathymetric source data are described in Jakobsson et al. 2012. The bathymetric source data used in the construction of IBCAO Version 3.0 grid consist of historic and recent under-ice soundings collected by submarines of the United States and the United Kingdom, historic and recent observations collected on icebreakers and ice camps and information portrayed in published navigation and compilation charts.

The objective of the IBCSO program is to gain better knowledge of the sea floor topography in the Southern Ocean. To achieve this, the IBCSO group collects and compiles bathymetric data from hydrographic offices, scientific institutions and data centres to create the first regional digital bathymetric model that covers all circum-Antarctic waters.

The digital version of the IBCSO V2 map is available for download at the PANGAEA web site. 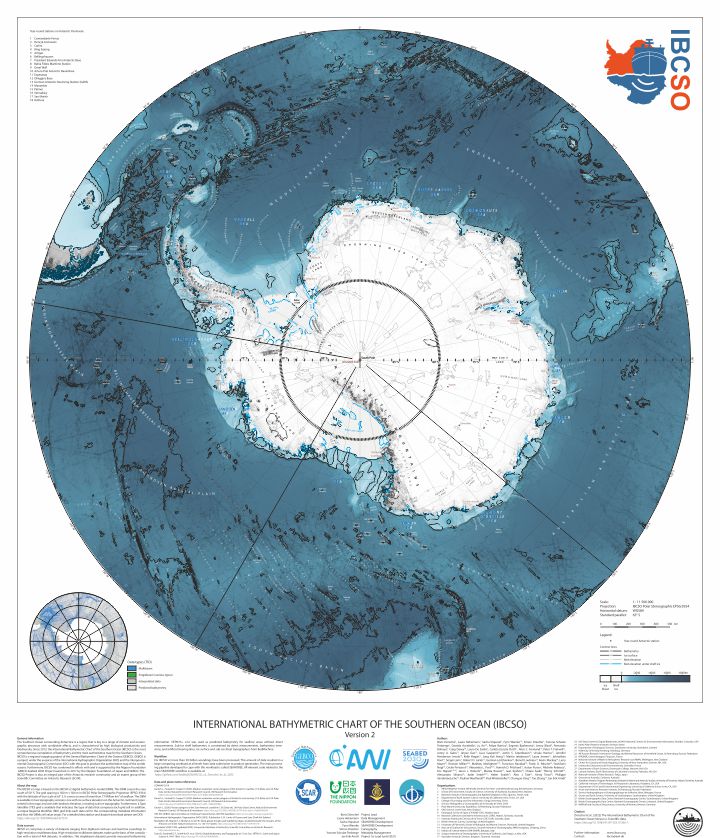 The IBCSO digital printable chart is based on the IBCSO version 2.0 digital bathymetric model.